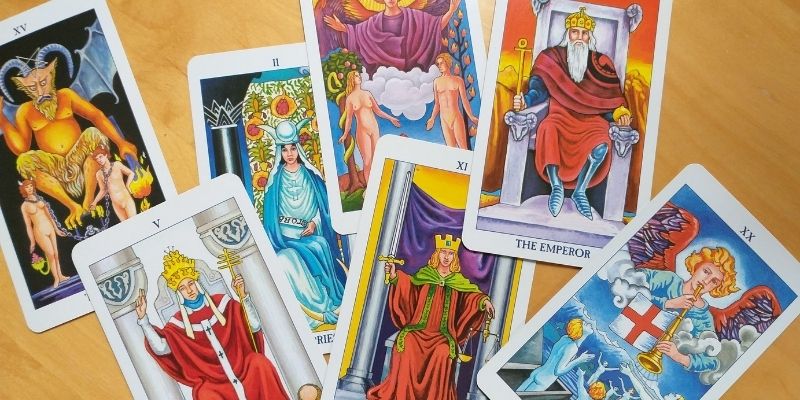 On the 3rd of November, people in the USA get to choose their next President. As I’m always looking for ways how tarot cards (or oracle cards) can help me in my day to day life, I wondered if I could make a USA election prediction. find a way to predict the outcome of the USA elections in November. Will it result in another four more years for Donald Trump, or will Joe Biden take over the White House?

Just for fun, I wanted to know if we can learn from the tarot cards combined with a bit of numerology how both candidates show up in alignment with their birth card, year card, and their personal card for the 3rd of November 2020. Can we predict with the calculations used, or is it all “fake news”? While I can’t change anything about the calculations I use, the attached cards, and the traditional keywords attached to the cards, I interpret the cards’ meanings.

Let’s see which cards rule over each of the candidates in the USA elections, how they use their talents in this election struggle, and if I can give a prediction of their chance to win.

Donald Trump was born on June 14th, 1946. This means that his birth card is calculated like this:

Corresponding card from the Major Arcana: The Emperor (4).

Keywords Emperor on the high side

Keywords Emperor on the low side

Do we recognize Donald Trump here? I do! He sure lives up to his birth card. Even when we look at the card on the low side, we can recognize the story about the book about Trump’s family, written by his niece. No matter if it is true, I guess Donald Trump will say it’s all fake news. He doesn’t want any of those stories out. I agree with him that you don’t want any dirt out on the street when you’re running for a second term. However, apparently, he has a lot of dirt to shovel out.

For Emperors, the role of the father is critical. Emperors often have a powerful father as a role model, and even though the man is dead and gone, Donald Trump is still trying to live up to the role model he got. At least, if you want to believe the book.

But when we look at the meaning of the Emperor card, we see precisely that, but on the low side. Donald Trump is not using his talents in this battle. We see a pushy, controlling, and disrespectful personality who wants to rule, no matter what. He’s not a politician; he wants to boss everything and everyone around. He fights dirty and plays the game in a way that isn’t showing his best side. As an Emperor, he should be able to play smart, to play with his opponent. But he’s choosing not to do that. Why? Why does he choose the collision course instead of showing the world that he’s everything they can hope for in these difficult times. I don’t think he’s showing them a real ruler. Instead, he’s on a head-on collision course. He disrespectfully insults people.

Coming from The Netherlands, I am amazed when I look at his way of campaigning. This has nothing to do with politics. It’s warfare. Not a good way to represent your role as a President.

What Donald Trump needs to do with a birth card like this is to trust his leadership more. Somehow he isn’t doing that. He fights so low that if you try to look past the angry face, there must be a very insecure personality. Why is he so angry? He’s been their leader for the past four years. If I were him, I’d show the people what good (and excellent 😉 things he did for the country. 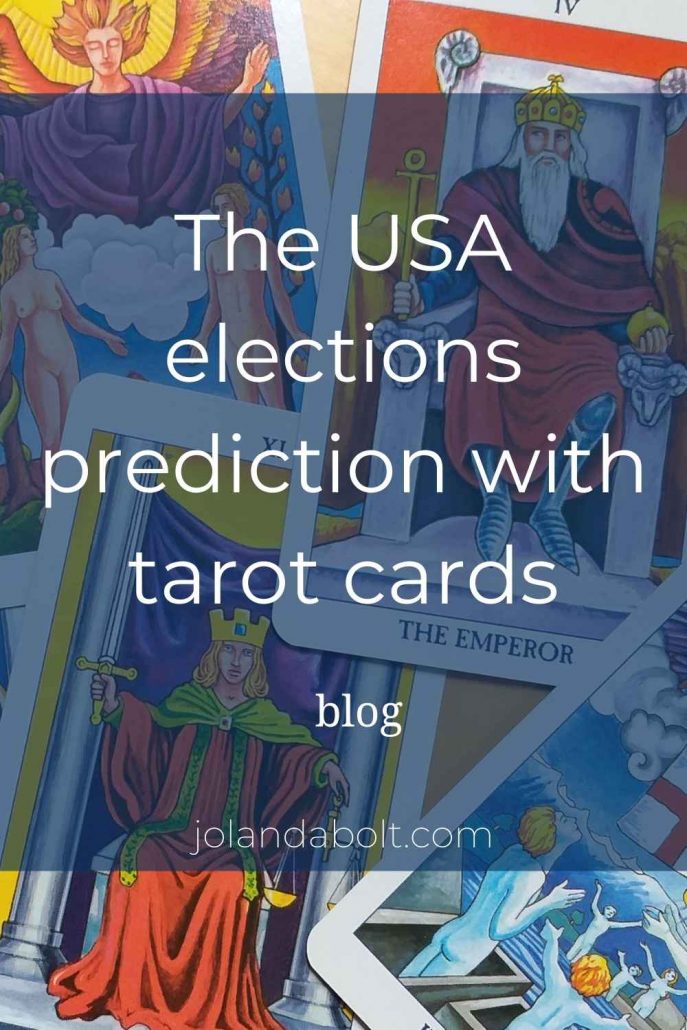 Joe Biden was born on November 20th, 1942. This means that his birth card is

Corresponding cards from the Major Arcana: Judgment (20) and The High Priestess (2).

Keywords Judgment on the high side

Keywords Judgment on the low side

Keywords High Priestess on the high side

Keywords High Priestess on the low side

Looking at these keywords, we can see why Joe Biden is less vocal than his opponent. Although the debate we saw this week was a #fail for both of them, neither one got the chance to talk about the program they have for the country. But we did see some parts of the High Priestess way where Biden wanted to connect with his voters and looked straight in the camera or talked about his experiences of having a family that battled with drug addiction just like many Americans do. He smartly did that.

With a High Priestess as the birth card, he’s more focused on what he feels, but the trick is to translate those feelings into words so he can connect through those words with his voters. But coming from a strong connection with his inner truth, he knows when his opponent is lying. That’s why he used the words “that’s not true” so often during the debate. I thought that was super interesting. He pointed out the mistakes Donald Trump made and infuriated his opponent with that (a ruler doesn’t want to have all his mistakes thrown back at him).

Another thing we’ve seen in Joe Biden is that he stagnates when he’s being confronted too much with emotionally tricky stuff. Direct energy pointed at him blocks him, and we’ve seen that happen. He stammers and stutters, which, frankly, doesn’t show his best side. Joe Biden needs to work on this stagnation to prevent Donald Trump use it against him.

Donald Trump’s year card is calculated as follows: you take the day and months of his birth date and add to that the number of the current year.

Corresponding card from the Major Arcana: The Devil (15) and The Lovers (6)

The Devil on the high side

The Devil on the low side

The Lovers (6) on the high side

The Lovers on the low side

I find it so interesting to see how we see many aspects of this card back in the current life of Donald Trump. I’ve watched the Netflix series on Harvey Weinstein, in which Donald Trump had a “cameo role”, with interest. It suggested that Donald Trump once spent time with Jeffrey Epstein, with young girls present. The series came out in 2020. It was a devil of a documentary.

Having a series like that come out in your reelection year is probably not something Donald Trump wanted to have. I am still surprised to see that nothing has been published in that area. Yet.

We see in this set of cards how Donald Trump uses manipulation and shows how he ignores boundaries all the time. He continually plants seeds of fear in people who are not well informed or are just as angry as he is. He only wants to hear one message: his message. He plays onto their addiction to fear.

With a card like this, I wonder if he has the best foundation to win this election. I am aware of my bias here (wasn’t it obvious yet?), but a card like this is not good news for winning an election.

Suppose he doesn’t win, and we translate it to the figure of a Devil. How would this figure react to losing the elections? He’ll be furious and probably won’t accept his defeat. In that way, he’s also not helped by his birth card that also doesn’t want to accept defeat.

Even though Arthur Edward Waited placed Strength in the 8th position, I believe that Justice needs to be reinstalled in its original position, back to the eighth position. Before you can develop inner power and strength, you need to be confronted with difficult moments in your life. This can be a bout with Justice or having a period in your life where you see things upside down (The Hanged Man).

Anyway, with Justice as his year card, Joe Biden makes such a better chance for winning the elections. Isn’t the saying: Justice is served? Especially when you look at this card from the Judgment point of view (one of his birth cards), truth is essential. So if that is the case, we must conclude that Justice is served if he gets his point across what is right.

Justice on the high side

Justice on the low side

Birth card, and year card for the American people

The election battle outcome is in the hands of the American people. So, why not look at the year card for the American people? As the USA got their independence on the 4th of July, 1776, we can also calculate the birth card and year card of the people who live in this country and can cast their votes. I sincerely hope that they all see how not voting in this election will take away their right to complain when the shit hits the fan.

As their birth card we add up the digits of the birth date of the country:

The Hierophant on the high side

The Hierophant on the low side

Again, I find this very interesting how I can recognize a country’s characteristics in a card’s meanings. The USA is a country based on strong family and societal values; traditions are kept high. Still, when I compare it to the country where I live, you’re basically on your own. If you can’t take care of yourself, then tough luck. Okay, maybe it isn’t as strong as that, but that’s how it comes across for me sometimes.

The country is founded on rebellion. Why else would it come together to free itself from the Brits? In the year 2020, the year card for the United States is

Well, I didn’t see that coming! The United States of America has the same year card as Donald Trump. Now we have to look at this card’s characteristics the same way as Donald Trump’s year card. I’d almost say that they are going to buy his story. Do they really want to be fooled, lied to, and ignored? I was almost depressed when I saw this card.

The case is that the people have the last say. The Lovers is all about making a choice, a difficult one because there are many aspects to keep in mind. They have to decide if it will be Trump or Biden. It’s not Trump’s nor Biden’s choice. Their votes are only two ballot papers in a sea of thousands and thousands of other people’s ballot papers. When it comes to voting, they are just two guys who hand in their ballot paper just like anyone else. Their opinion of who should win doesn’t matter. They’ll vote for themselves.

It is up to the people of the United States, who’s going to win. The one who becomes President is a translation of all people who take the trouble to stand in line or cast their vote by mail. All I can say is: take your responsibility for the country you live in. Vote on the 3rd of November 2020 or mail your vote as soon as you can if you’d rather not stand in line for a long time because of COVID-19. Stay safe, vote safe.

Just for fun: my prediction

Just for fun, I’m predicting Joe Biden will win. I predict this on calculating the personal day number for both candidates. You calculate it as follows: the day of their birth plus the month plus the date of the elections

Go vote. It’s never been this important (whether or not this USA election prediction is true)!

PS If you want to get insights on things that are happening in your life, order your tarot reading.